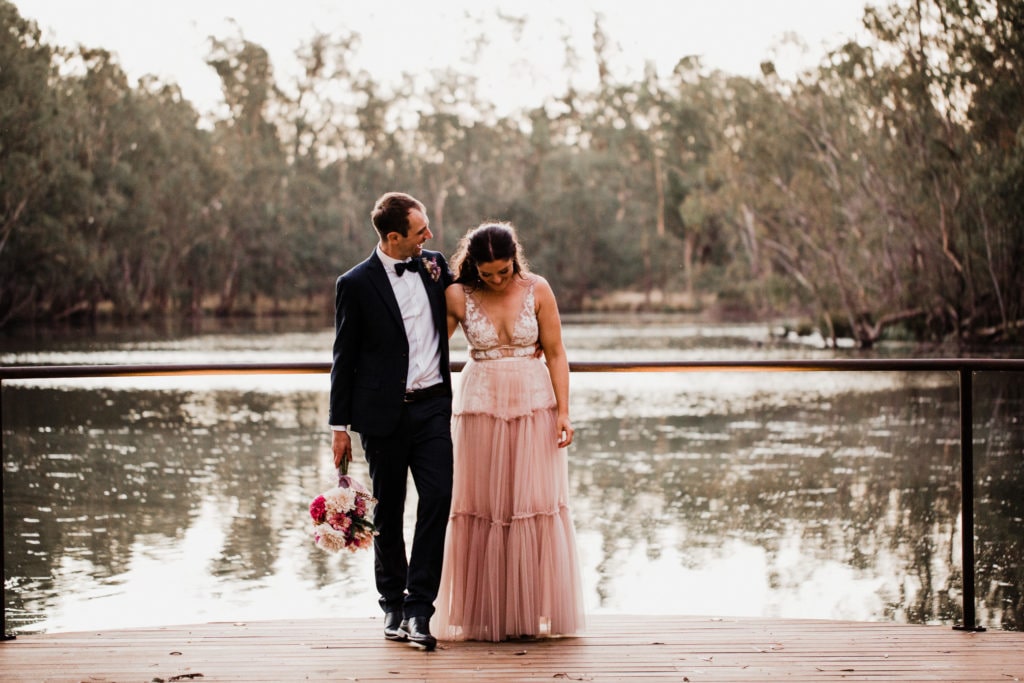 Any wedding day is a rollercoaster of emotions and the inevitable last minute panic but drama took on a whole new meaning for Bindi & Tom who, at one point, were not certain that it could even happen! At 1:00pm it was announced that the whole of Victoria would be going into a stage 4 lockdown for 5 days, starting at midnight that night. When Whitney (2nd shooter extraordinaire and fabulous daughter) & I arrived at the venue, I was told that the wedding could not go ahead (whaaaaaa??) but thank god that was a confused receptionist not the actual deal! There was certainly some tension in the air when we got to Bindi & Tom’s room but that only lasted a nano-second and true to form, these two classy people and all those around them just reviewed the timeline to suit the start of lockdown time and declared how grateful they were to be able to proceed.

It was through Bindi’s cousin, best friend and bridesmaid Lizzie that Tom & Bindi met. Bindi & Lizzie were living together in London and after Lizzie met Tom while travelling in Barcelona, Tom invited her to his house party where she took Bindi along. What followed is the classic ‘and the rest is history’ culminating in Tom proposing near a snow covered lake in the Dolomites, northern Italy. Romantic or what??

Bindi’s mum Jacinta said in her speech that when Bindi went to live and work England in her early twenties, she was ‘terrified that she would meet someone and never come back’.  So it was a happy Mum when Tom, who grew up in Copthorne, outside Brighton, made the decision to move with Bindi back to Australia. A move that comes with a fair wallop of sacrifices and homesickness. And he never could have accounted for a pandemic that would ultimately destroy any chance of his family and loved ones attending his wedding. His brothers Steve & Ed were to be his best men. The video messages from England were very emotional for Tom.

When I asked Bindi to share a special memory she said “I remember the first gig we went to in Brighton, at the Green Door.. and I remember feeling so high on life that I was ‘falling in love’ and just the truly wonderful glow you feel when you meet someone that special.’I love that, and it typifies Bindi and her capacity for fun and aliveness. She and Tom were a dream to work with, despite the challenge and anxiety thrown at them due to COVID forcing them to postpone once already as well as knowing that an outbreak could happen at any time. It was pure good fortune that their wedding day went ahead and when I left them they were sure making the most of the time they had! The party was in full swing!